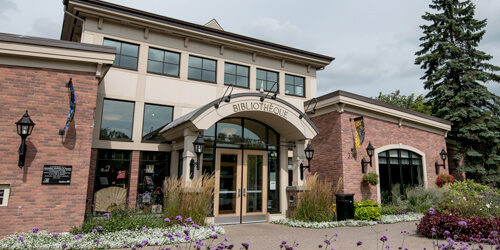 The library is closed for the following holidays:

The library is closed for the following holidays:

The history of the Rosemère Municipal library is a long and lovely one. In 1942, during World War II, one of the first libraries in the region was established in a small community of some 500 families. Back then, there were no doctors, police department or fire station in this vacation paradise. Yet...books already held such an important place in the Rosemère community that volunteers came together to carry out a project dear to their hearts: a library. And so, in:

The idea of a library was born.

A library for Rosemère’s English-speaking adults was established on a private property.

A library for English and French-speaking youths was set up. We have been told that Rosemère was not only the first bilingual library in the region, but in the Greater Montreal area.

A library for French-speaking adults was established.

The library moved to the Rosemère Community Centre at 339 Grande-Côte.

The library was expanded and transformed.

With the introduction of the Internet, the library made new information technology available.

The library was expanded, between September 2003 and April 2004.

The online catalogue was launched.

The mobile library was introduced.