April 20 2016
Undertaken in 2014, thisprocess seeks to adapt services and programs to encourage the activeparticipation of senior citizens in their community. Rosemère’s demographicprofile has evolved considerably in recent years, which led the Town to updateits Family and Seniors Policy inresponse to the significant needs of two of its citizen groups: Rosemèrefamilies and seniors.
This policy was developed inorder to maintain and enhance, for the benefit of families and seniors, theRosemère community’s outstanding living environment.  "Integrating the AFM process in our policyclearly demonstrates the importance accorded to seniors in our community,”stated Madeleine Leduc who went on to explain: "In order to ensure that ourpractices effectively correspond to our citizens’ needs, the Town of Rosemèreimplemented a consultative process, which gave rise to a plan of action.” At apress conference held on April 19, the Town of Rosemère unveiled its pamphletrecapping the highlights of this policy and its plan of action.
Rappid+orPrevention Program
The plan of action resulting from this policy includes a set of actionsand interventions involving the two targeted clienteles. Moreover, the Rappid+orProgram, which seeks to promote a safe and healthy living environment forresidents 65 years of age and over, will be in operation as of the month ofMay. This program gives Rosemère senior citizens the opportunity of beingvisited by a team of volunteers who will assess their environment and recommendmeasures to ensure their safety by identifying, for example, risks of fire,falling and becoming victims of fraud. In addition, it may be recalled that,last February, the Town of Rosemère increased its offering of public transitfor seniors 65 years of age and over. Finally, Rosemère offers a host ofactivities to families and youngsters through its Recreation Department. "Theseconcrete measures, which demonstrate the Town’s involvement with these two populationgroups, are fully consistent with the municipality’s values as they relate tothese persons,” added an obviously delighted Madeleine Leduc. 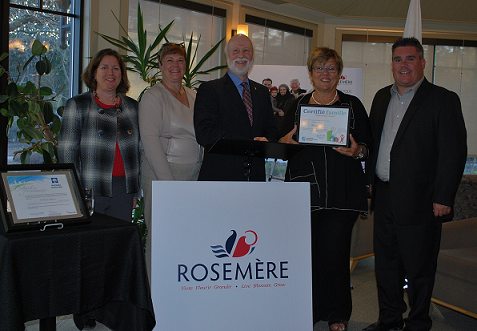