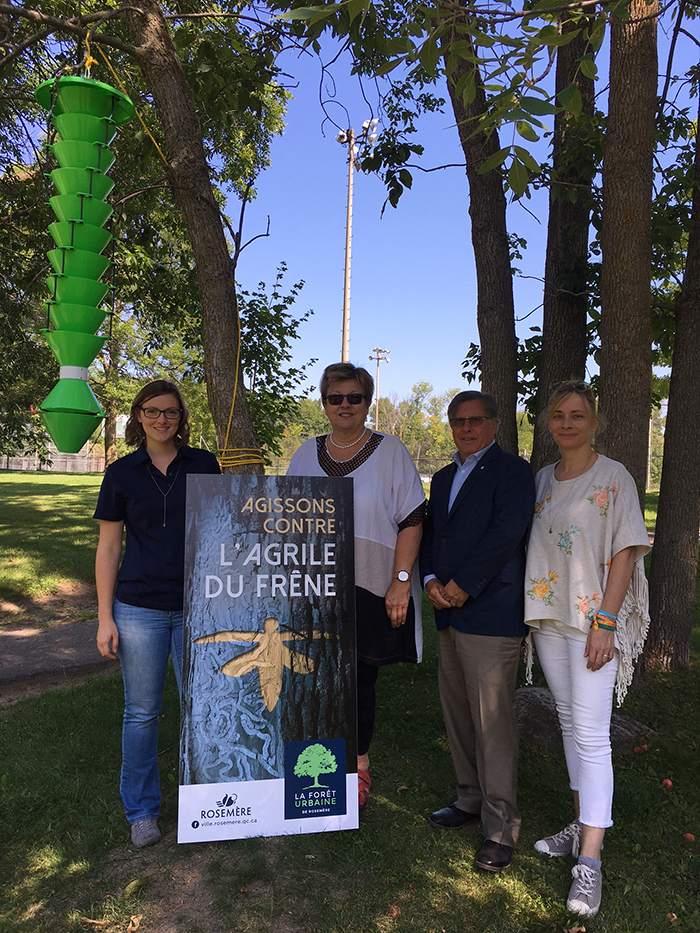 ROSEMÈRE, August 30, 2017 – The Town of Rosemère is taking part in an experimental biological control program, this summer, to combat emerald ash borers. This program is being carried out in participating municipalities by GDG&Nbsp;Environnement, a company in Trois-Rivières specializing in the biological control of biting insects. The method used consists of contaminating the borers by means of Beauveria bassiana, an insect pathogenic fungus. This company recently installed some thirty traps in selected trees at Rosemère’s Rosenbloom and Bourbonnière parks, where there are more than 160 ash trees in all.

The funnel traps used consist of a biological auto-dissemination device that forces the emerald ash borers to cross through a chamber contaminated by the parasite fungus. The borers then fly away and continue their normal cycle. During the course of reproduction, the fungus is passed on to a greater number of insects and then develops and kills the borers in just a few days’ time. The traps represent no danger to the other insects.

At the source of this project is professor Claude Guertin of the Institut national de la recherche scientifique (INRS) and Robert Lavallée, a researcher at National Resources Canada, who developed this biological control device to combat emerald ash borers and who entered into a partnership agreement with GDG Environnement to test the traps in participating municipalities. Based on the results obtained, this four-year experimental program should lead to the approval of this product for home use.

Rosemère is one of some ten municipalities in Québec that has enrolled in this pilot project to date. "Protecting our natural heritage is one of our priorities. By taking part in this project, we are contributing toward the advancement of science in fighting emerald ash borers and we are increasing our chances of slowing down the progression of this insect pest that is threatening our urban forest. Since the presence of emerald ash borers was confirmed on our territory in 2014, we have been stepping up our efforts to keep them from spreading. And particularly by implementing and updating an ash tree replacement policy, an integrated action plan to support residents in managing their own trees and by carrying out campaigns to raise residents’ awareness of taking action against emerald ash borers," explained Rosemère Mayor Madeleine Leduc.