Citizen Honoured for an Act of Bravery 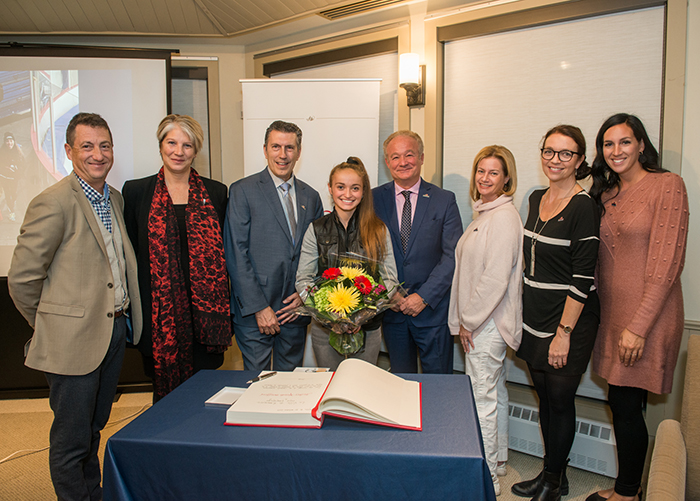 On last October 10, Rosemerite Audrey-Maude Bouffard was honoured for saving a man’s life this summer while she and her family were on vacation in Ontario. The ceremony took place in the atrium of the Rosemère municipal library, with family and friends in attendance.
On July 21, 2019, 17-year-old Audrey-Maude was getting ready to leave the beach at Sandbanks Provincial Park in Ontario, where she was visiting with other members of her family. That is when they heard cries of distress coming from the lake. Without hesitating, Audrey-Maude sprinted toward the beach where, with the help of several other people, she pulled the man ashore and proceeded to administer CPR. After about three minutes, he started to breathe again.

Rosemère Mayor Eric Westram expressed his unreserved admiration for the young woman’s heroic conduct: “Audrey-Maude Bouffard saved a man’s life. She showed tremendous character and courage in a situation that may have otherwise been fatal. We are fortunate to have someone like her living in Rosemère. Her courage and perseverance are an inspiration for us all. We congratulate her on this act of bravery, which is richly deserving of our praise.”

The ceremony included a number of touching tributes as well as the presentation of an honorary plaque to Audrey-Maude. She also received the Medal of the National Assembly from Éric Girard, MNA for Groulx, in recognition of her heroism. In addition, she was asked to sign Rosemère’s Golden Book to immortalize this extraordinary act in the annals of the town’s history.