Inauguration of a Place for Youngsters in Rosemère's Charbonneau Park 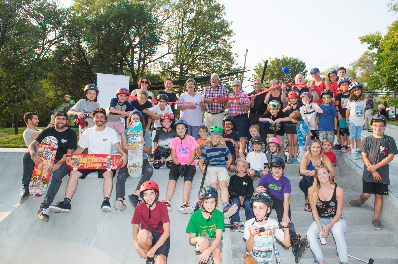 Place des jeunes was inaugurated September 15 in Charbonneau Park, in front of Rosemère's Town Hall parking lot, at the same location as the former skatepark. The Town of Rosemère and the Corporation de développement culturel et sportif de Rosemère (CDCSR), the two partners in the project, made this announcement in the presence of youngsters from Rosemère. In order for it to become a place where young residents in the community can get together, this space dedicated to youngsters, which will be supervised by leaders from the Club option jeunesse, also includes rest areas, picnic tables and a protective shelter in bad weather. The project was carried out over a period of three months, according to the planned schedule, and required a total investment of $700,000, with each of the two partners contributing an equal amount.

"Thanks to the partnership with CDCSR and its generous financial contribution, young Rosemerites now have a safe, easily accessible place all their own, with a state-of-the-art skatepark where they will be able to have a wonderful time practising their skills on their skateboards, inline skates, scooters or BMX bikes. We are very happy to provide them with this space based on their wants and needs and where they can all get together—a space that encourages them to be active and practise healthy habits. The layout should please them, as it was designed on the basis of suggestions from discussion groups and consultations with youngsters," stated Rosemère Mayor Madeleine Leduc.

"This new space for youngsters improves the youth component of the recreational, cultural, sports and community activities we offer. Among the projects for young people and sports, we previously got involved in planning and designing Club option jeunesse de Rosemère and the construction of the Centre Multisports Rosemère-Rive-Nord. We are therefore proud to have succeeded in making this new space come true, just recently, along with the Town of Rosemère—a space designed to prompt youngsters to adopt a physically active lifestyle," commented Fernand Proulx, president of CDCSR.

Following the ceremony, in order to officially launch Place des jeunes, the young Rosemerites on hand were invited to try out the brand new skatepark by taking part in an event hosted by Qc.SkateboardCamp school. This was an opportunity for them to learn skateboard basics and then take part in a friendly competition supervised by professionals.

The development of La Place des jeunes is part of the City's desire to improve the quality of infrastructures at Parc Charbonneau.A central space in the Town, Charbonneau Park is filled with greenery and is designed for family and intergenerational activities. It is a very popular place that is well appreciated by all residents for its sports infrastructures (natural and synthetic soccer fields, petanque and outdoor skating rinks), recreational (pond and banks of the Thousand Islands River) and civic (city hall and public works).