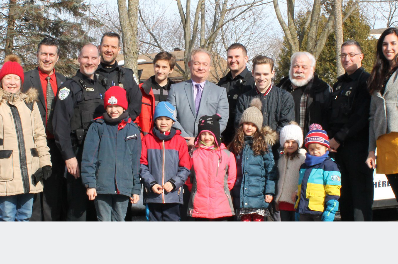 Rosemère, March 29, 2018 – On March 29, the director of the “Régie intermunicipale de police Thérèse-De Blainville” (RIPTB - Police Board) proudly announced, to members of the board of directors and citizens, the establishment of a four-member neighbourhood police team consisting of one lieutenant and three officers. This new neighbourhood police squad seeks to be closer to citizens in the residential areas of the four municipalities served by the Police Board, i.e. Rosemère, Boisbriand, Lorraine and Sainte-Thérèse, as well as in the public areas of these four territories.
Rosemère mayor Eric Westram welcomed the news: “We are pleased to have collaborated on the implementation of this neighbourhood police project that is adapted to the specific characteristics of the towns it serves and meets a need strongly expressed by our residents in various meetings. We brought the security expectations and concerns of Rosemerites to the Board’s attention. Based on proximity to residents, this new neighbourhood police squad reflects, in every regard, our municipal administration’s approach, which is rooted in attentiveness, dialogue with citizens and open-mindedness,” he stated.
“In developing the proactive strategy adopted by the RIPTB in 2016, the focus was on the function of neighbourhood police (closeness to citizens) and involved the appointment of four neighbourhood police officers serving as area resources. These officers will conduct strategic patrols through various sectors, observing targeted environments and, mainly, carrying out interventions related to the objective, i.e., establishing closer ties and partnership relations with an eye to prevention and problem solving,” explained director Francis Lanouette.
Given their local approach, neighbourhood police officers are in a position to inform residents and contribute to their safety. These officers have already started visiting merchants to advise them on security and prevention, going into areas sensitive to criminal activity, and organizing, with their colleagues on the Prevention team, road safety information activities as well as applying municipal by-laws and other regulations.
The RIPTB, neighbourhood police, a community partner!
Back to news