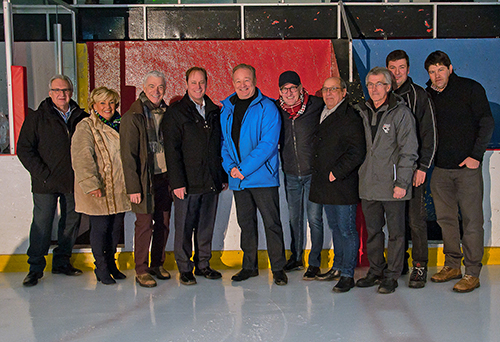 ROSEMÈRE, Thursday, February 1, 2018 – Last month, January 25-28, over 550 players among 40 teams in Novice A, B and C categories in the region skated on Rosemère Arena rinks within the 25th edition of the Lorraine-Rosemère Inter-Regional Novice Tournament, organized by the Lorraine-Rosemère Minor Hockey Association, in cooperation with the towns of Rosemère and Lorraine. A total of 530 medals were awarded all throughout the event.

For the second year in a row, two Lorraine-Rosemère Novice A teams faced off in the grand finals held on Sunday, which were won by National1, receiving a Gold Medal, while National2 earned a Silver one. A very intense game, with spectators holding their breath right up to the third period, which proved to be a decisive one, before the grand winners of these finals were determined, with a score of 4-1.

For the 25th edition of this tournament, residents were invited to take part in the various festivities held during the weekend and highlighted by a Ferris wheel, BBQ and lively background music. Three all-star games also took place at the arena on Saturday. The teams consisted of the best players on the teams at all levels. The two all-star teams that competed in the third game were managed by Mayor Eric Westram and Councillor Philip Panet-Raymond, respectively, who were able to give their best advice and cheer on the players. Each all-star game was preceded by a breathtaking performance of the National Anthem by Justin Baril, a young boy with muscular dystrophy whose twin brother Zaccarie Baril is a goalie on the National Atom A team. This musical performance helped the young Lorraine resident raise nearly $1500 in voluntary contributions toward the High-Rise Challenge, a sports event raising donations in aid of the Muscular Dystrophy Canada organization.

Rosemère Mayor Eric Westram made a point of emphasizing the merits of everyone involved, both on the ice and behind the scenes, who took part in this 25th edition: "On behalf of the Town, I would first like to congratulate the young athletes who participated in the tournament and who treated us to unforgettable performances. The determination, enjoyment and outstanding team spirit in this tournament definitely contributed toward the success of this sports event, which attracted a good many fans all throughout that weekend. I would also like to make special mention of the remarkable work done by the Lorraine-Rosemère Minor Hockey Association, in organizing this event. A total of more than 30 volunteers, made up of coaches, parents and members of the Board of Directors of the Association, put their heart and soul into making this 25th anniversary a very great success."

The Lorraine-Rosemère Minor Hockey Association was also awarded honorary plaques by Hockey-Québec and Hockey Laurentides-Lanaudière, in recognition of the 25 years of passion and dedication that make it possible, year after year, for more than 450 youngsters from Rosemère and Lorraine to take part in this sport.