Throughout the week, the city councils of Boisbriand, Lorraine, Rosemère and Sainte-Thérèse ratified the renewal of the intermunicipal agreement for the Régie intermunicipale de police Thérèse-De Blainville (RIPTB). This agreement, which has a ten-year term, will take effect in 2023.

Created in 2003, the Régie was born of a desire by the four member cities to join forces in order to meet the new requirements of the 2001 reform of the Police Act. This reform notably created levels of police services to be offered according to the number of inhabitants in the territory to be served. Being part of the Montreal Metropolitan Community (MMC), the member cities of the Régie had to offer the population a level 2 service. Since then, the RIPTB is in its third renewal, which demonstrates both the professionalism of the organization and the desire of the four partner cities to collaborate.

Mr. Eric Westram, Mayor of the Town of Rosemère and Chairman of the Board of Directors of the RIPTB, wished to acknowledge the work of his colleagues from the towns of Boisbriand, Lorraine and Sainte-Thérèse throughout the discussions that led to the renewal of this agreement: "On behalf of the members of the Board of Directors of the Régie, I am pleased to announce the renewal of the intermunicipal agreement relating to the Régie intermunicipale de police Thérèse-De Blainville. I would like to thank my colleagues, Marlene Cordato, Mayor of Boisbriand, Jean Comtois, Mayor of Lorraine and Sylvie Surprenant, Mayor of Sainte-Thérèse, who have defended the interests of their respective populations while ensuring the continuity of the Régie. Thus, we maintain a police organization that is recognized as a professional service of proximity, involved with the citizens and partners. I would like to take this opportunity to thank, on my own behalf and on behalf of the members of the Board of Directors of the Board, the Director of the RIPTB, Mr. Francis Lanouette, for his leadership and his commitment to the community. I would also like to thank our police officers and all civilian personnel for the services they provide to our citizens.   It should be noted that this agreement will have to be formalized by the Ministère de la Sécurité publique and the Ministère des Affaires municipales et de l'Habitation in the next few weeks.

We are privileged to have the Régie intermunicipale de police Thérèse-De Blainville (RIPTB) as a community partner! This dynamic organization is present on the territory and makes a real difference in the quality of life of the towns it serves. Sainte-Thérèse is very pleased with the renewal of the RITPB agreement and we are proud of the work this police organization does on a daily basis," said Sylvie Surprenant, Mayor of Sainte-Thérèse and Vice-Chair of the RIPTB Board of Directors.

We are very proud of the conclusion of this agreement which will allow us to continue to ensure the safety of our population for the next decade, a guarantee of long-term stability. Since 2003, the collaboration of our four municipalities has allowed us to offer our citizens high quality services. I would like to thank the members of the Police Board for their professionalism, their competence and their ability to listen. Not only are taxpayers in good hands, but they also benefit from savings thanks to the equitable sharing of costs between our cities. In short, this is a win-win situation for everyone!

-Mr. Jean Comtois, Mayor of Lorraine and member of the Board of Directors.

I am very satisfied and happy to renew this agreement for 10 years. The Régie intermunicipale de police Thérèse-De Blainville is a police organization recognized by its peers that meets the needs of our citizens, while respecting the specificities of each of our cities. Their highly professional approach and their proximity service serve the entire population - Marlene Cordato, Mayor of Boisbriand. 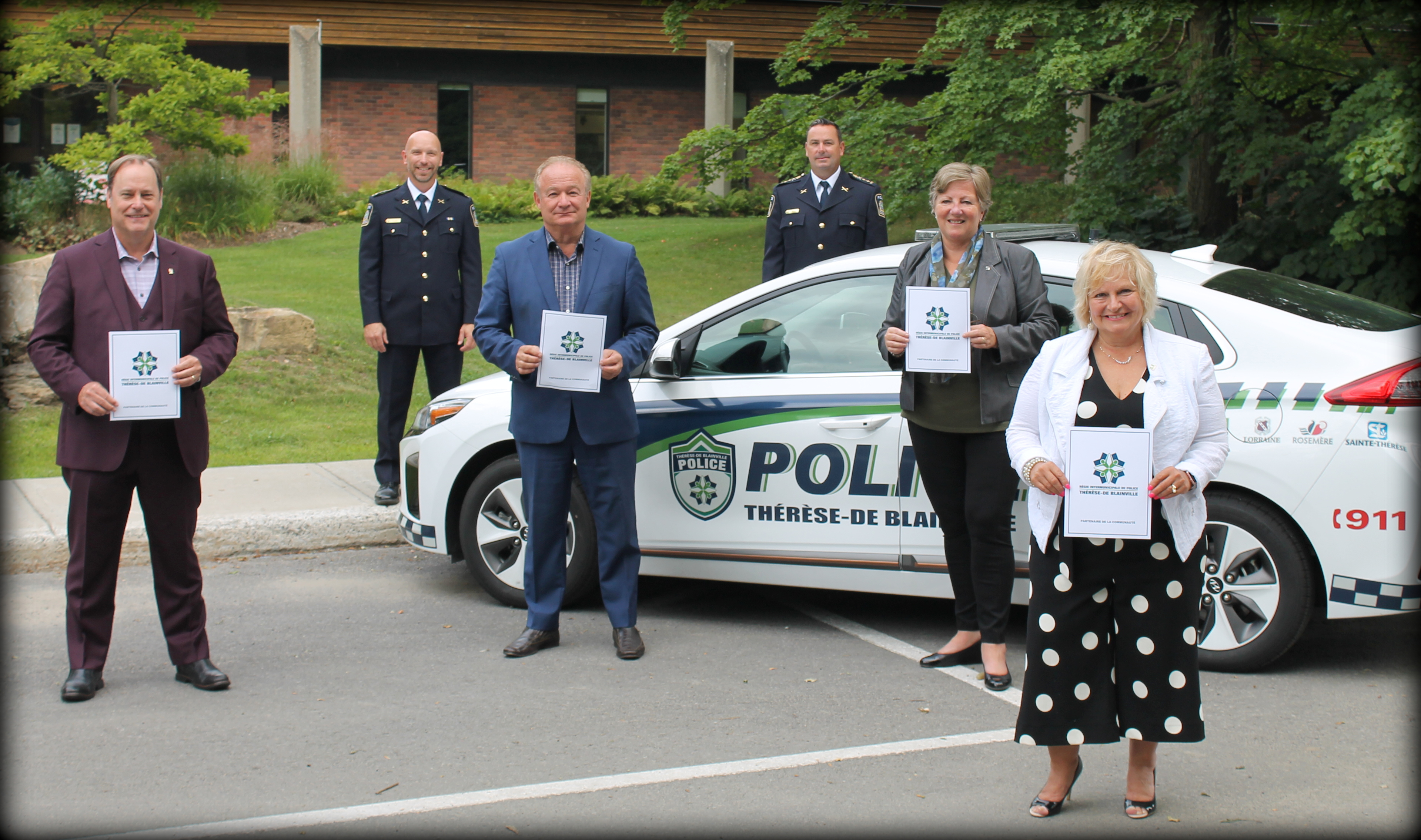