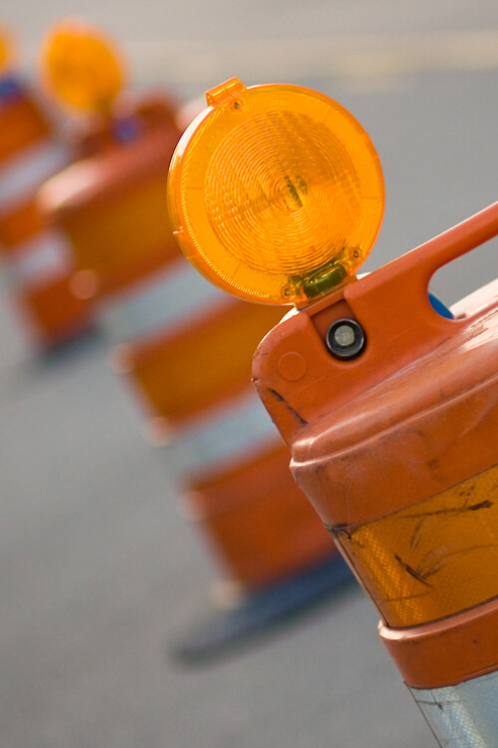 Should you have any questions, do not hesitate to contact the Planning and Sustainable Development Direction – Infrastructure Services at (450) 621-3500 ext. 3314.

As of early June, Hamilton Park will undergo a major $350,000 transformation to better cater to the needs of young Rosemerites. Upgrades include new play structures chosen by and for day camp and daycare attendees. These kid-friendly amenities are bound to be a hit with families in the neighbourhood and across our community. Be sure to watch for them!

Construction of the CHarbonneau Chalet

Much to its great delight, the Rosemère community will soon be able to benefit from a superb municipal chalet featuring modern architecture and built with eco-responsible materials and an eco-responsible design. It will be located on the former volleyball court, near the existing splash pads. Covering an area of 35 feet by 40 feet, this building will be accessible both summer and winter. It will feature a rest area where people can change their clothes and put on their skates during the winter, locker rooms with washrooms, a terrace on the second floor where it will be possible to admire the scenery as well as a watercraft rental stand in the summer. In addition, educational posters on the features of this eco-responsible building will give residents the opportunity to learn more about this ecological aspect, and even to be inspired by it as well!

The Town is proud to be able to count on the significant financial support of the CDCSR, which has agreed to contribute an annual amount of $60,000 over a 15-year period, which represents 50% of the cost of building the chalet.

The construction of the chalet is in line with the primary idea of restoring access to the waterfront area for residents who want to enjoy the pleasures of water sports, in particular. Moreover, the Éco-Nature organization that manages the Rivière-des-Mille-Îles Park, along with its regional partners, would like to submit a project (Rés'eau-Vélo) to the Communauté métropolitaine de Montréal (CMM) aimed at implementing an ecological, utilitarian and recreational transportation network along the river and waterfront area as part of the second phase of development of the blue-green infrastructure. In particular, Éco-Nature will offer the clientele self-guided tours, an electric shuttle boat service and the rental of various watercraft as well as traditional and electric bicycles. This new range of services will help ease the pressure on the Laval tourist welcome site, increase accessibility to residents of all waterfront municipalities, create the connectivity that this park needs to pursue its development mission and create the public involvement required to ensure the sustainability of its ecosystems. 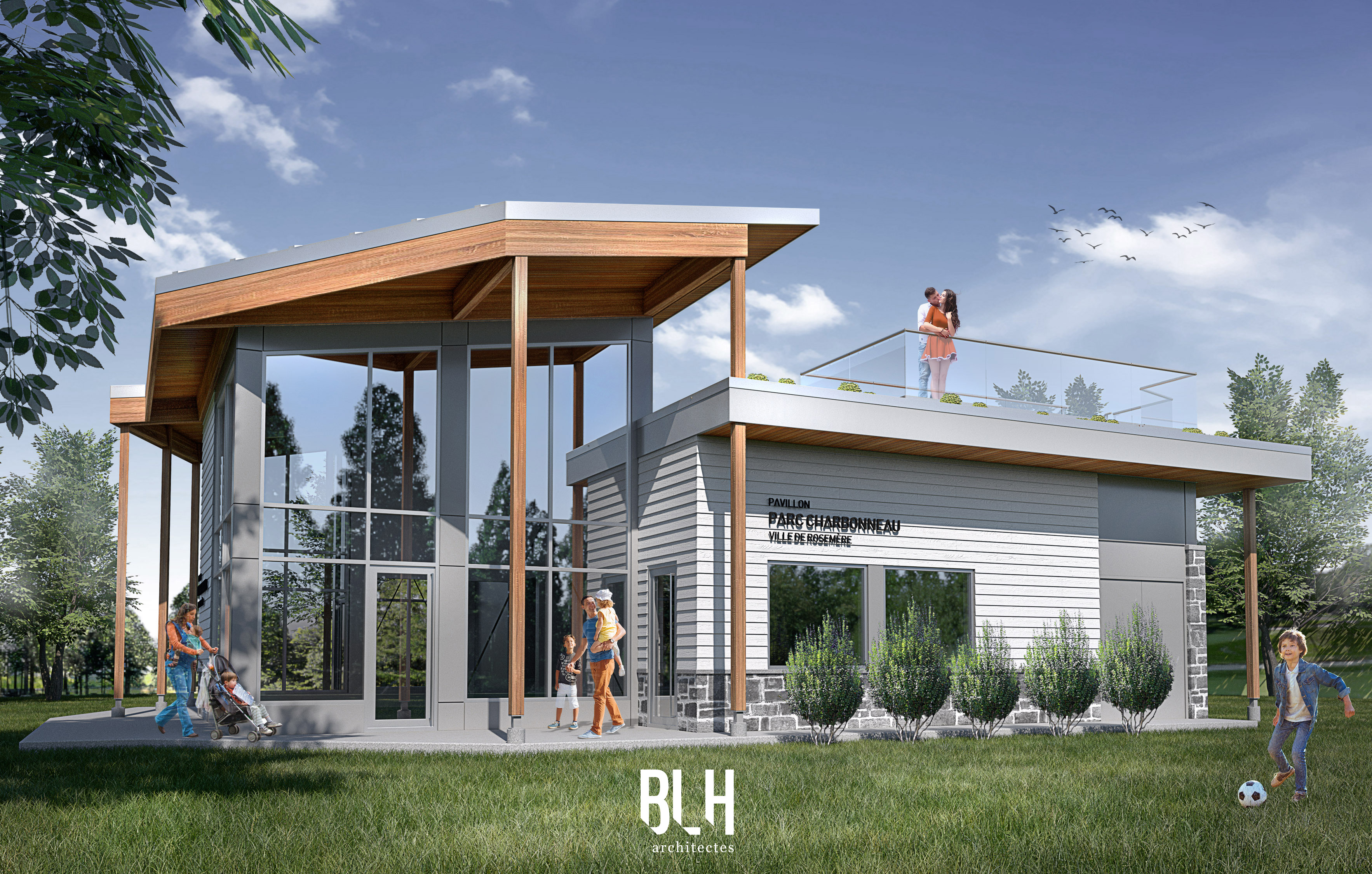 Weight restrictions and partial closure on the Île Bélair Bridge

These measures will be in effect indefinitely. Vehicles over 5 tonsnow have to take a marked detour via Highway 15. 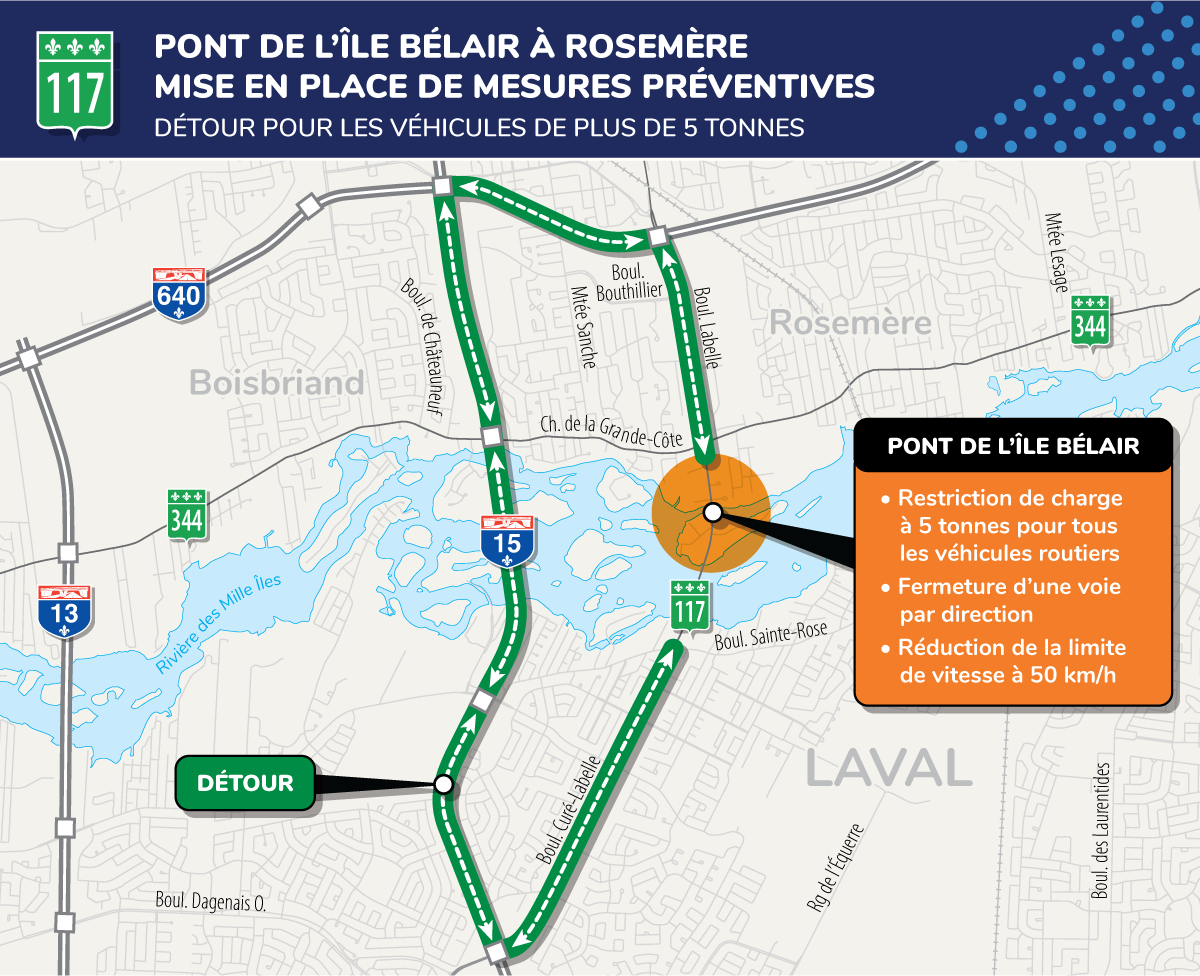 For additional information, go to the website of the Ministère des transports.

2020 - Investments and financial assistance: Update on Infrastructure Projects in Rosemère

Despite the health situation we are facing, a number of investments have been made in Rosemère to provide a better quality of life for our residents. These projects have received funds from several programs providing financial assistance as well as grants from the Québec government and organizations.

"As a responsible municipality, we must look after the maintenance of our infrastructure and ensure that everything is working efficiently. By carrying out this rehabilitation work, we wanted to improve the quality of life of the residents who live on these streets as well as their safety when walking, cycling or driving. Despite the inconveniences caused by these worksites since the summer of 2019, residents now appreciate the improvements made. We would like to publicly thank the Ministère des Affaires municipales et de l'Habitation for their financial support," stated Rosemère Mayor Eric Westram.

Waterworks on Forget and Montclair streets

As part of the work to replace the water main on Forget and Montclair streets, this project was submitted under the financial assistance program of the Québec 2019-2023 Gas tax and contribution program (TECQ). This request for financial assistance is currently being examined; however, we may be able to obtain up to 100% of the costs of the work. A decision is expected next year.

As part of the project to rehabilitate a portion of the bicycle path north of Autoroute 640, Rosemère would like to warmly thank the Trans Canada Trail organization for their financial support, which made it possible to carry out this project totalling $382,000 before taxes. Thanks to their generous grant of $110,000, Trans Canada Trail is therefore supporting our local network (Le P'tit Train du Nord), while contributing to the continuous improvement of this great trail on a national scale.

In addition, a grant application was recently submitted to the Ministère des Transports (MTQ) in order to recover a maximum of 50% of the balance of the cost of the work. Once again, the decision is expected next year.

Since the end of September 2020, the 1.4-km section between Roland-Durand Boulevard and Montée Lesage north of Highway 640 has undergone major repairs during the fall months.