The Mayor’s November Breakfast - Youngsters in the Spotlight! 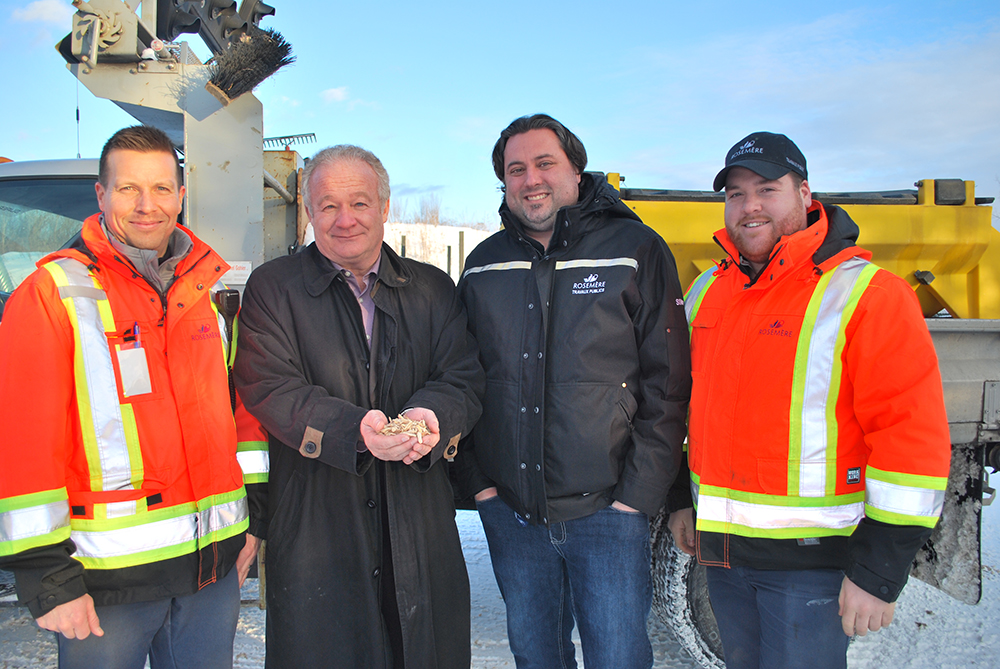 ROSEMÈRE, Monday, January 15, 2018 – In early January 2018, the Town of Rosemère launched a pilot project calling for the deicing of streets using a new product consisting of wood chips soaked in magnesium chloride. Testing, which will go on throughout the winter, will be carried out on Île Bélair and Glendale streets near the Mille Îles River as this biodegradable product has a neutral pH and is less harmful to waterways, among others.

Unlike sodium chloride, which is toxic to the environment and is found in traditional road salts, wood chips soaked in magnesium chloride do not make their way into the groundwater table and do not damage concrete or steel. Measuring 5 to 2 centimetres long, the chips become embedded in the snow, providing greater adherence and, thanks to their magnesium chloride content, can hold for six days up to temperatures of -30oC. By comparison, traditional deicing salts lose their effectiveness at temperatures below -15oC.

To manufacture its new product, Technologies EMC3 of Joliette drew inspiration from an initiative from Switzerland, where, for many years now, wood chips have been used for their skid-resistant quality on sidewalks, bicycle paths and roads.

Rosemère has now joined the ranks of Québec municipalities that have taken the initiative to test this product. Mayor Eric Westram explained: “In Rosemère, we are open to testing any innovative environmental protection measure that appears to be safe, serious and, ideally, has shown its effectiveness elsewhere in Canada or the world, as in the case of the Swiss use of wood chips. At the end of winter, based on results of our pilot project and its costs, we will evaluate the relevance of extending the project, next year, to other streets located near waterways. As a green town, the quest for a more ecological solution to deicing streets in vulnerable locations remains a priority.”