The opening of the municipal pool will take place on June 19th!

Rosemerites still in agreement with the Town's vision

Rosemère, June 3, 2021 – A press conference was held by the Town of Rosemère to present the results of a survey conducted by the firm Léger among 500 residents to solicit their opinion on certain aspects of the preliminary draft of the urban plan tabled last January. The future of the former Rosemère golf course, an issue that has been widely publicized in recent months, was obviously at the heart of this study.

For Mayor Eric Westram, it was essential to get the pulse of the population on this issue of great importance to the population: "The goal of this survey was to confirm or deny the opinion of Rosemerites regarding this preliminary draft of the urban plan, which resulted from three years of public consultations.  Also, the context of the pandemic has complicated the way to exchange and collect the concerns of citizens as we could do before. Thus, this scientific survey was the best way to continue our citizen engagement approach that we have been implementing for the past four years," he explained.

72% of citizens agree with the Town’s position

Nearly three out of four citizens (72%) somewhat or totally agree with the Town’s position, which set a minimum of 50% of the former golf course area to be preserved as green space and natural environments. For Mr. Christian Bourque, Executive Vice-President of Leger, who presented the results at the virtual press conference, this is an indisputable result: "Combined with the fact that 91% of respondents indicated that they had already heard about the project, this response rate scientifically confirms strong public support for the Town's position.”

On the financial issue, 71% of citizens are divided as follows: 33% of residential property owners refuse any increase in their tax bill to finance the acquisition, in whole or in part, of the former golf course site. Of those who are willing to see their tax bill increase, 38% would be willing to pay up to 5%.

A Town that listens

Three-quarters of the population (75%) believe that, in general, the Town consults citizens sufficiently on important issues.

The survey also validated some of the points raised during the public consultations on the revision of the Urban Plan. Regarding the need for housing, the majority of citizens still consider it a priority to increase the supply of housing, especially for young families (67%), but also for seniors (59%).

Not surprisingly, the majority of citizens would prefer that future buildings be limited to 4 stories or less in the key sectors of the town. This is notably the case on the site of the former golf course near Highway 640 and Labelle Boulevard (65%) and in the Labelle Boulevard sector between Grande-Côte Road and Bouthillier Boulevard (71%).

Mayor Westram stated at the press conference: "The survey results show that the findings that emerged during the consultations still meet the expectations of the vast majority of our community. As I have always stated, no zoning changes will be made without consultations with all Rosemerites. Social acceptability is part of our DNA and I will maintain this way of governing. "

Léger indicates that the telephone survey was conducted among 500 Rosemerites aged 18 and over, who could speak either French or English. The maximum margin of error associated with this sample is plus or minus 4.1%, 19 times out of 20. The questionnaire was composed of about 30 variables including profile questions, with an average completion time of 10 minutes. The full survey report is available on the website at www.ville.rosemere.qc.ca, What's Happening / Former golf course Dossier section, in the Download section on the left-hand of the page, and the video of the press conference held virtually will be available shortly. 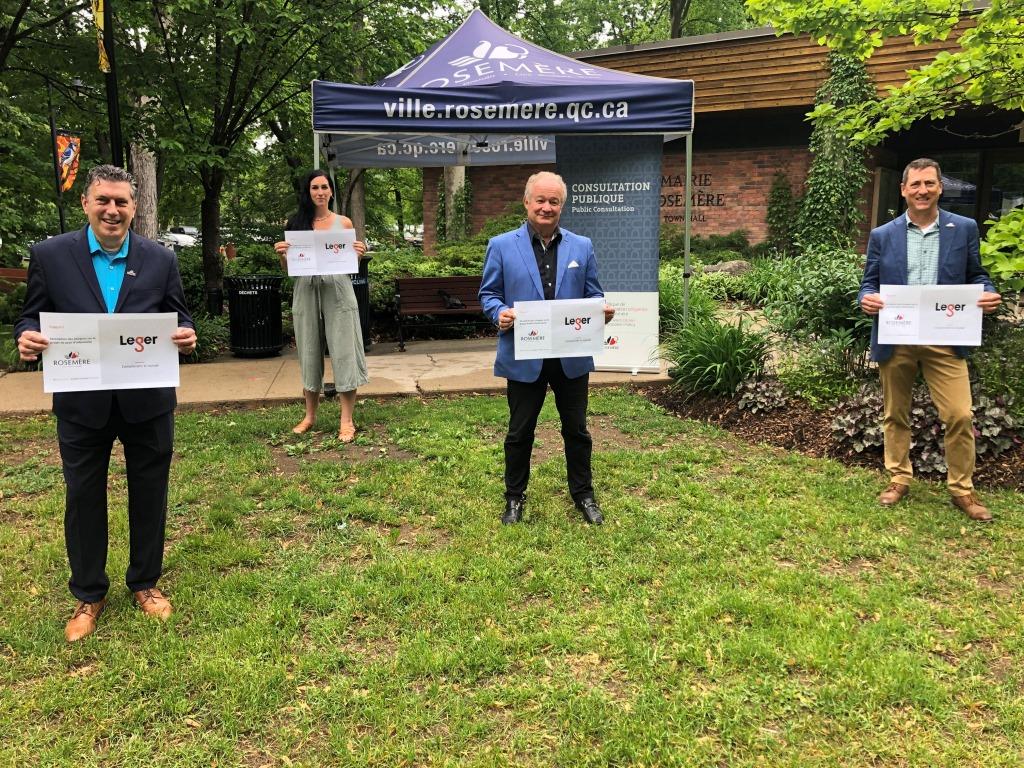