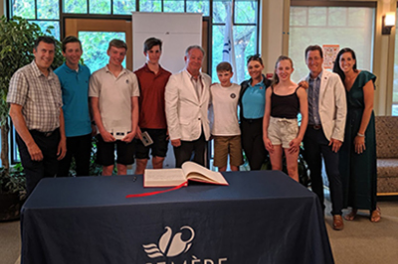 ROSEMÈRE, June 20, 2019 – As part of an official signing of the guestbook in the library's atrium yesterday, the Town of Rosemère wanted to highlight the outstanding sports achievements of 8 young athletes from Rosemère, including 7 who participated in the 54th Finals of the winter Jeux du Québec and another who made history in the field of women's golf.
"I am very impressed with the dedication and discipline shown by these young people on a daily basis! Rosemère is very proud to have among its residents athletes who stand out on the national and international scene!" stated Mayor Eric Westram.
This signing ceremony took place on June 19 with the young athletes and their families.
Mahée Bellemare (gymnastics), Émile Cloutier (diving), Olivier Desrosiers (fencing), Samuel Lachance (boys' hockey), Frédérick Maltais (boys' hockey), Samuel Philippe (speed skating) and Jeanne Renaud (girls' hockey) were proud to represent the Town of Rosemère in Québec City, March 1-9, 2009.
Émile Cloutier won a silver and a bronze medal in diving 1 and 3 metres. Olivier Desrosiers won two gold medals in fencing (individual and team). Jeanne Renaud won a gold medal in girls' hockey.
As for Brigitte Thibault, she was recruited by Golf Canada to join a group of 17 elite athletes who are part of one of the national amateur and junior Team Canada teams in 2019. She is the first Canadian golfer to take part in the first Augusta National Women's Amateur Tournament, bringing together the best amateur female golfers in the world. The Fresno State University student had the chance to play on Augusta National's fairways on the same course used during the Masters Tournament. She joins the Amateur Team as a rookie, after having competed in three finals and scoring among the top 10.
–30 –
Back to news