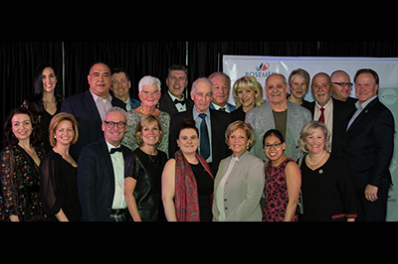 On March 16, the Town of Rosemère hosted Honored Citizens Evening to shine the spotlight on six special residents and one local organization. At this event, attended by roughly 100 people from the community, the awardees were presented with a certificate and an honorary pin and were asked to sign the Town’s Golden Book.

The call for nominations occurred in the fall between October 15 and December 15, 2018. The selection committee, made up of Hélène Daneault, Cynthia Kabis, Caroline Nadeau, Jo-Anne Syrenne and Claude Guérin, recognize the talent of the following recipients:

1. Hélène Bergevin for going the extra mile for a wide range of causes.

2. Eduardo Cary for his dedication and volunteer efforts in promoting local and regional soccer.

3. Roger Daigle for being a pillar of community life for more than 40 years, and still ready to lend a helping hand at nearly 82 years old.

4. Miori Hénault for outstanding athletic achievement leading up to her participation as a swimmer in the Parapan American Games in Lima in 2019.

5. Jeunesse Action Rosemère for providing financial support to Rosemère youth to empower them to develop their athletic, community and cultural potential and help them flourish.

6. René Poirier for his passion for growing food organically and for sharing his love of gardening with young people.

7. Yvan Deschênes Award– Gayle Lemm for her tireless efforts to make life better for the less fortunate, both here at home and abroad.

“The people and the organization we are honouring today are a great source of pride for our Town,” said Mayor Eric Westram. “We are pleased to pay tribute to them and commend them for their commitment, perseverance and generosity. These remarkable honourees set an inspiring example for all Rosemerites and help make our community even more vibrant. I would also like to thank everyone who took the time to submit a nomination.”

* Please note that tributes are published in the same language as they were read during the evening.
Back to news