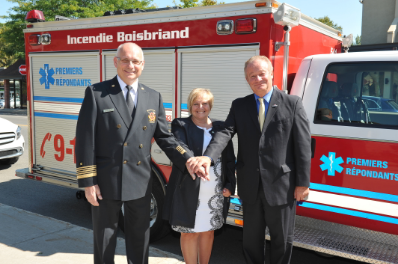 Rosemère, September 13, 2018 — The towns of Boisbriand and Rosemère have just concluded an agreement according to which the Town of Boisbriand’s Fire Department will provide first responder service to Rosemère residents. This service will be implemented over the coming weeks, as soon as it receives the official go-ahead from the “Centre intégré de services sociaux des Laurentides” (CISSS – Integrated Health and Social Services Centres).

“This is excellent news and a fine example of the efficient use of groups and the optimization of municipal human and material resources. The Boisbriand Fire Department is the first in the Laurentian foothills to have permanent firefighters certified as Level 3 first responders. The expertise of our firefighters allows us to provide this quality service to the citizens of Rosemère,” noted Boisbriand mayor Marlene Cordato.

First responders are the first to arrive on the scene of an incident ahead of ambulance paramedics. Boisbriand’s first responders are trained to intervene in cases of cardiac arrest, anaphylactic shock, trauma and medical emergencies (home births, diabetic coma, etc.). They respond to some 1,100 emergency calls per year. The agreement concluded with Rosemère will bring that number up to approximately 1,400.

“The safety of Rosemerites is a constant concern for the municipal council. It is with considerable satisfaction, therefore, that we have concluded this agreement with Boisbriand for the services of its first responder firefighters. Given their proximity to our population, they will respond quickly and effectively to emergency situations in Rosemère, until the arrival of paramedic ambulance technicians.

“Last June, the “CISSS des Laurentides” launched a campaign targeting municipalities in an effort to promote first responder services. We were the first to answer the call, which is why we can now conclude this agreement with Rosemère,” added Claude Prévost, Director of the Boisbriand Fire Department. A Rosemère resident who dials 911 for a medical emergency will see his call transferred to the CCS (Health Communication Centre), which will immediately dispatch first responder firefighters and paramedic ambulance technicians.

The first responder service was implemented in Boisbriand in May 2017. Thanks to the permanent staffing of the fire station, this service is available 24/7.

The Town of Boisbriand’s firefighters are qualified and operate within nine teams specialized in rescue techniques that allow them to intervene in places that cannot be accessed by paramedic ambulance technicians: water or ice rescues, structural or excavation trench collapse, enclosed or high spaces, isolated environments, etc.