The MRC Thérèse-De Blainville, in collaboration with the municipalities of Boisbriand, Blainville, Bois-Des-Filion, Lorraine, Rosemère, Sainte-Anne-Des-Plaines and Sainte-Thérèse as well as the Régie intermunicipale de police Thérèse-De Blainville, the Service de police de Terrebonne and the Service de police de Blainville, is pleased to launch its new road safety awareness campaign: #Partagelaroute. This campaign aims to protect vulnerable people with regard to road safety risks, more specifically by targeting road sharing. The campaign will be rolled out in three phases and based on three themes: pedestrians (WATCH), motorcyclists (SLOW DOWN) and cyclists (SHARE). The first phase begins today, while phases two and three will be rolled out next May and June.

"A general challenge facing municipalities is the safety of vulnerable users. The MRC is constantly creating territory-wide initiatives that encourage inter-municipal collaborative efforts by all the community's key players. It is within this context that we are very pleased to contribute toward funding this prevention campaign, in partnership with the Government of Québec," stated Kamal El-Batal, Director General of the MRC Thérèse-De Blainville.

The first phase of the campaign runs from October 22 to November 22 under the theme "WATCH" and is aimed at motorists and pedestrians. Awareness will be raised mainly through an animated video clip shared on social networks. Also, posters with the colours and images of the campaign will be displayed in the municipalities and stickers will be distributed by police officers during awareness operations.

"With this regional campaign, we want to improve our road safety record and make residents aware of their responsibilities, particularly in terms of sharing the road. We want to emphasize the protection of more vulnerable users and the safe habits to adopt," added Richard Perreault, Préfet (warden) of the MRC Thérèse-De Blainville.

"To watch is to be 100% vigilant at all times. Each one of us, whether we are in our own vehicle or pedestrians, we must make sure that we can see, hear and are seen by the other road users. We are all part of the solution!" stated Rosemère Mayor Eric Westram.

According to the SAAQ, there is a higher number of accidents involving pedestrians in October, November and December. The Greater Montréal area is by far the region with the highest number of pedestrian accident victims, all injuries combined. Making pedestrians and drivers aware of the rules of the Highway Safety Code is the key to ensuring safe road sharing, in harmony!

This campaign is made possible through the financial assistance program of the Fonds de la sécurité routière of the Ministère des Transports du Québec. 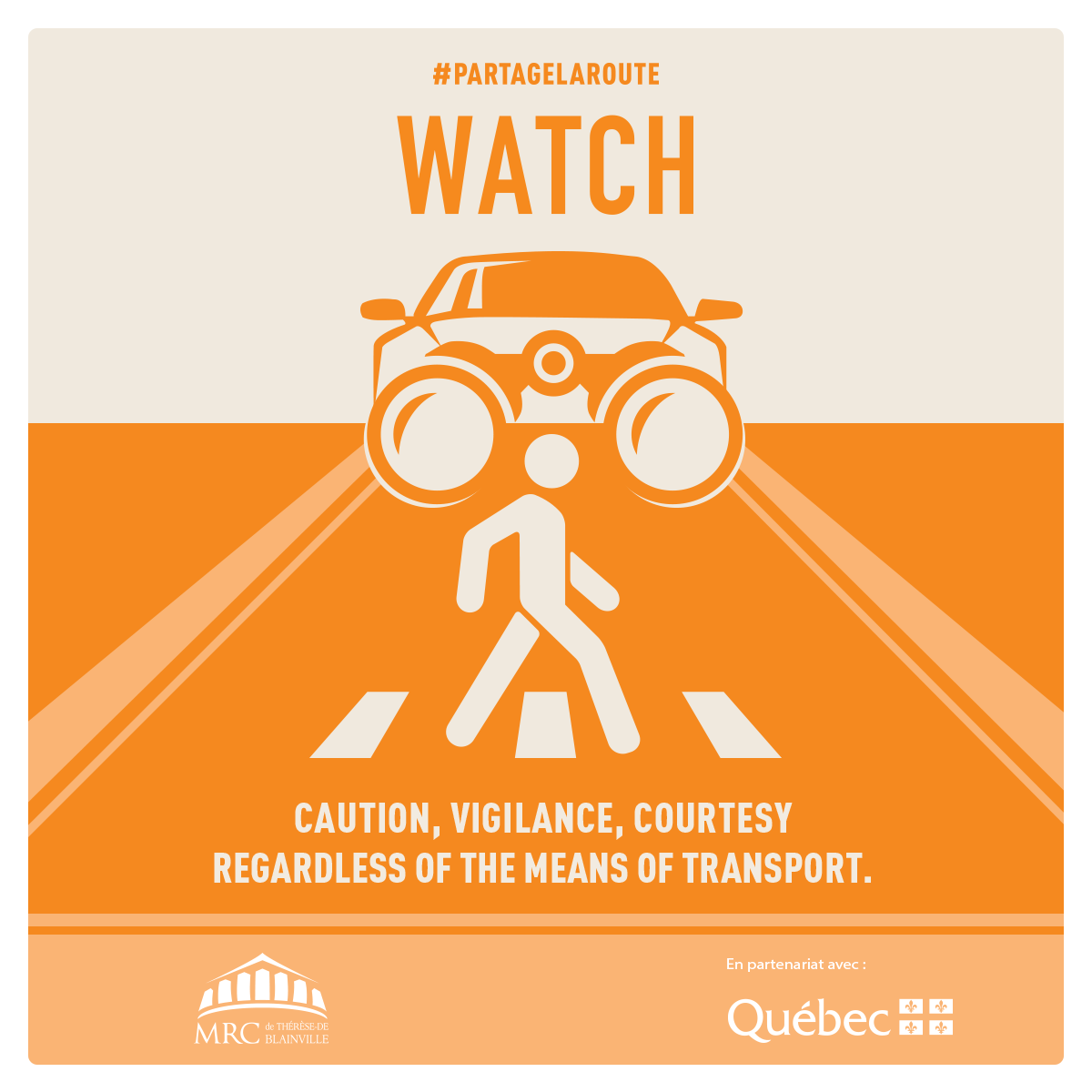